We deliver our Uth snake spacers mainly abroad. The internal tests are carried out according to high quality criteria, which meet international requirements.

Our Aaron spacers are externally tested and certified according to the requirements of the "DBV-Merkblatt Unterstützungen" cited in German standard DIN 1045 and Eurocode 2 (EC 2). We will gladly provide you with the current certificate upon request. 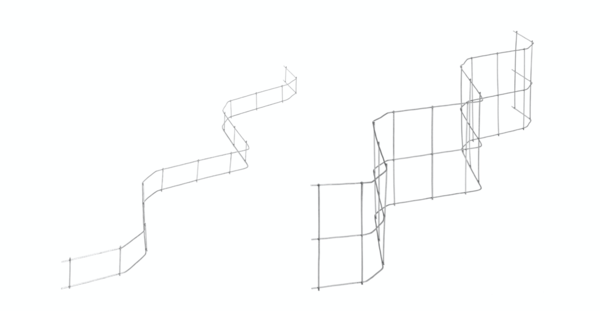 The spacers are used to fix the position of the upper reinforcement layer, the distance to the lower one and the concrete cover thickness.

The spacers can also be used to define the distance of two reinforcement layers in walls. The spacing depends on the type of the reinforcement. Typically 50 to 70 cm can be assumed.

Usually the spacers are arranged linearly and need to be sufficiently fixed to keep the reinforcement in its planned position.

The spacers withstand the weight of the common reinforcement and temporarily an additional usual load during the construction work. Exceeding point loads caused by reinforcement steel mesh rolls, charging buckets and similar loads must be avoided without additional support.

In 1971, Mr. Uth had the idea of building snake shaped spacers. In March 1972, Mrs. Uth applied for the first patent in Germany, which was laid open in October 1973 and was later on strengthened by further patents.

Troughout the first years, they let produce different special meshes in Switzerland, which were cut in Freilassing and bent to distance holders.

In 1981, Mr. Uth assigned us to the production of the strips, which were processed to snake spacers in his company. The first manufacturing plants from a special engine builder did work for quite a long time and later we built our own machines.

In the meantime we constantly improved the technics and are able to produce very effectively with modern wire welding plants – combined with our own special machines – and to be responsive to particular customer wishes at short notice.

We guarantee punctual delivery times from a well-stocked warehouse and deliver with selected carriers.